Back in October, I was asked to be a sponsor for the RCIA program. A couple of days before I was asked, I saw the news in the bulletin, but I thought I was too late because the program already started, so I shrugged it off. The next thing I know, the Deacon at our parish asked me if I ever thought of being a sponsor for the RCIA. WHAAAAAAAT???? Wow… God really knew I was meant to be there.

As the months went by, I realized that the person I was sponsoring is definitely the person that God had meant for me to be paired with. She’s a young, beautiful woman, with a young baby, who needed guidance and understanding in her life. I’m so blessed to have her in my life, and this past weekend, I was blessed to witness her commitment to our faith and the Catholic Church.

These are my observations from the last week and a half. The weekend before Easter, we had a retreat. It was the last of 3 retreats for the program. This one was more of an individual, soul searching retreat. The other two were geared to increasing the bond between sponsor and candidate! A few things struck me during the retreat: 1) talking was kept to a minimum. (kinda hard for me…) haha; 2) the stations of the cross was a very powerful reflecting moment, even for a cradle Catholic, like myself; 3) the people we journeyed with are a family!

Moving on… starting on Thursday aka Maundy Thursday,  as I was sitting beside my friend, I was able to witness such beauty within our church. It was quiet, solemn, and reverent, with a ton of symbolism thrown in. This mass was different than the regular masses throughout the season. It felt empty…like you knew Jesus was going to die the next day! I left the mass feeling the sadness that must have been felt during Jesus’ time. I should note that my candidate missed this mass because she had to work.

Good Friday service was definitely interesting. Because I know how busy our church gets, I packed up my family to get them to the church around 2. We arrived slightly after 2 and there were lots of parking spaces as well as seats! My family sat separate from me because I was sitting with my candidate. The awesome thing is… i allowed Philip to sit in the front pew with me. I was sooooooooooo proud of him. He was attentive and quiet during the whole mass. This was a huge parenting win for us! Rios was sitting with Isaac and Aaron. Aaron slept for 95% of the mass and Isaac slept for a bit during the long service. This was a good day for our kids! We had some people tell us how well behaved our kids are. I first thanked God and then I thanked the person. It took us a long time to get them to the point where they can listen to what’s going on. For those people who don’t want to bring their kids to church…. JUST DO IT!!! They will never learn how to behave unless they are exposed to the culture.

On Saturday…. this was the big day! We had our rehearsal for the evening during the day and after we went back to the church to wait for the start of the whole Easter Vigil. In the time it took between Good Friday and Easter Vigil, both Rios and I found out that we were going to be the Godparents of my candidate’s daughter!! Let me tell you, I was Soooooooo excited!! Rios was slightly nervous, but excited too! I’m excited to be on this journey with her as she learns her faith through her mom and me and Rios’ example. Easter vigil was amongst the best nights of my life. I was able to witness my candidate,  her daughter and t people we were journeying with, receive their sacraments! What a sight to behold. The whole mass was 3.5 hours, but it was worth every minute spent. I was able to witness one of the sponsors, who was diagnosed with stage 4 cancer, endure the entire mass. She arrived at 7:15 and didn’t go home until after 11. She had the brightest smile on her face! Only the grace of God could have allowed her to be there and have the energy to continue! She never complained once. I only wish that if I ever have an illness like hers, that God will give me the strength to endure it as gracefully as she did!

The final day: Easter Sunday…. Hallelujah, He is Risen!!! I know we also celebrated it on Saturday, but there’s something different about Easter Sunday! We arrived at church by 9:15, and thankfully, there were lots of seats available! Philip wanted to sit in the front row, but Isaac didn’t, so we settled for the third row. Once again, by God’s grace, our children were well behaved! Woo hoo!!! It’s AMAZING to see the fruits of love being sown before our ver eyes!

If you ever get the chance to be an RCIA sponsor, I would highly encourage you to do so. It’s so beautiful to see someone’s faith deepen in in few short months.

Children are always a blessing. Yes they may drive us crazy at times, but with more children comes more opportunities to show love to each other and to show love to they neighbour.

Who knows what will happen next RCIA season, but what I do know is that my first time being a sponsor has changed my life forever!

Thank you for reading, 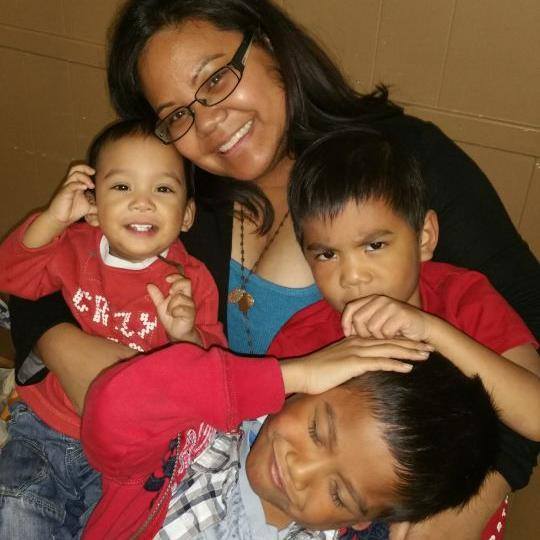 It’s no secret that I have three young boys: Philip aged 7; Isaac aged 4 1/2; and Aaron aged 19 months.  They have taught me a lot about the way boys see the world and the way their humour is.  A lot of times I end up rolling my eyes at their silliness, but at the same time, I am also in awe of the wisdom that comes out of their young mouths.

They teach me to have more fun and to let go a little.  I love the way they make my heart melt with the warmness of their love.  They inspire me to be a better mother and better role model. SOOOOOOO…… the reason for my post this week is to talk about the importance of raising my boys to treat their future spouses with respect and love that Christ has bestowed upon us.

Since learning about the Theology of the Body and how it saved my marriage, I vow to make sure my boys know about this beautiful teaching and hope they take it to heart and be able to live in this society working to heal it from its deep wounds.

I have a lot of funny stories that pertain to the raising of young boys…. oh…. tons of them… hahaha

Let’s start from the beginning…. Philip was born in 2009, and he will be catalyst for this teaching. He is also the one that is now truly responding to it.  Thankfully with the grace of God, he has been understanding the teaching and even reminding his brothers what to do.

Having boys definitely has its challenges, especially in the realm of appropriating their bodies.  Philip is a silly kid and he often dances silly at home and then brings his silliness to school, and that often gets him in trouble.  The boys and I often have discussions about making sure they respect their bodies and that their bodies are sacred because we don’t just have a body, we are our bodies.

Soooooo I’m going to give some practical tips on what I’ve been doing to teach my boys the basics of the theology of the body:

These are the things I’ve learned while studying the theology of the body, and how it relates to my child rearing.  My sons are the fruits of my labour and by the grace of God, they will continue to learn how to treat others with respect and dignity.  This is my job and I’m going to do the best I can to raise these boys right!