Even after having 4 kids, you’d think that breastfeeding would come easier with the fourth kid, but nooooooooooo….. Jacob is throwing me for a loop. First it was the bottle feeding… That was interrupting the proper latch and his preference for the bottle seemed to overtake his want for breastfeeding, so we cut out the bottles. Second it is his latch, since he was bottle fed, his latch was smaller then the typical one. Mind you he also has a really small mouth because he’s a preemie, so we’ve been using a nipple shield to help open his mouth wider, but with that comes other problems: he doesn’t get as much milk as he would drinking from the bare breast. Third, since we’re using the nipple shield, he latches better using that than on the bare breast, but I’ve been working on getting him off the nipple shield. So that’s another transition. Fourth, he hasn’t been gaining as much weight as we’d hoped, so instead of adding formula, as other people would, we’ve been adding a tube while feeding him…to get him to a higher weight….Sigh…so many things going on.

How much are you willing to sacrifice for your baby… To try to give him/her the best possible nutrition… It’s really hard… And the sad thing is… A lot of mothers give up before their babies. One thing I have learned in my life regarding breastfeeding is NEVER give up! If you’re willing to sacrifice yourself for it, it will be totally worth it. There is help out there if you really want it. But first you have to get over the painful latches of the milk production issues to be able to be in the clear.

Breastfeeding takes a lot of patience, persistence and a heck of a lot of the miracle nipple cream I was prescribed! Let me tell you… Without that nipple cream, I don’t know where I’d be.

Thinking about how this relates to the Theology of the Body… In so many ways, a mother is that child’s representative of Jesus, metaphorically, of course.

She willingly feeds her child, losing sleep and other things that come along with it. But if you knew what the milk was, you’d also understand the parallels with that of the Holy Eucharist.

What is the Holy Eucharist? It’s literally transformed from bread and wine into the body and blood of Christ. See John chapter 6 in the Bible. Jesus’ body and blood becomes the sustenance for our lives. If we eat of his flesh and drink his blood, we will have eternal life. He is the life source of our lives.

In the same way it can be for breastfeeding…the mother’s body and blood is transformed into sustenance for that little baby. Without the milk, the baby would die. But I guess one of the most beautiful things to think about is that mothers get to feed their babies just like the Blessed Mother fed the baby Jesus. She gave up her body for him so he could live by drinking the milk that her body produced.

If breastfeeding doesn’t make you a saint, I don’t know what will. While I’m sitting here, feeding Jacob, sometimes I wonder why I don’t just quit breastfeeding this little boy… And as I contemplate this, I think no… I could never give up on this. This is my sacrifice for him but also for those who need prayers. My struggle will be offered up for those who need and want prayers. So if you’d like me to remember you during my struggle please comment on this post, and I’ll be sure to pray for you during my breastfeeding journey.

Before I end this post, if you could also lift me up in your prayers, I could really use them. Breastfeeding is hard, but one thing I’ve learned is… Get the help…it’s out there if you need it.

This is where I got my help…

The doctors here are great! And so is the lactation consultant. I wouldn’t have made it this far without their help.

One last note… I was reading another blog about 5 saints who should be known by breastfeeding mothers, and one that really stood out was St. Zelie Martins. She was the mother of St. Therese of Lisieux. She was unable to breastfeed her children and had to send them to live with wet nurses because she couldn’t feed them. And many of them died while they were separated from her. 😮 Can you imagine?? Your babies died because you couldn’t breastfeed them?? I’d be devastated and I’m sure she was. So I’m that note, I’ll end this blog with a short prayer. 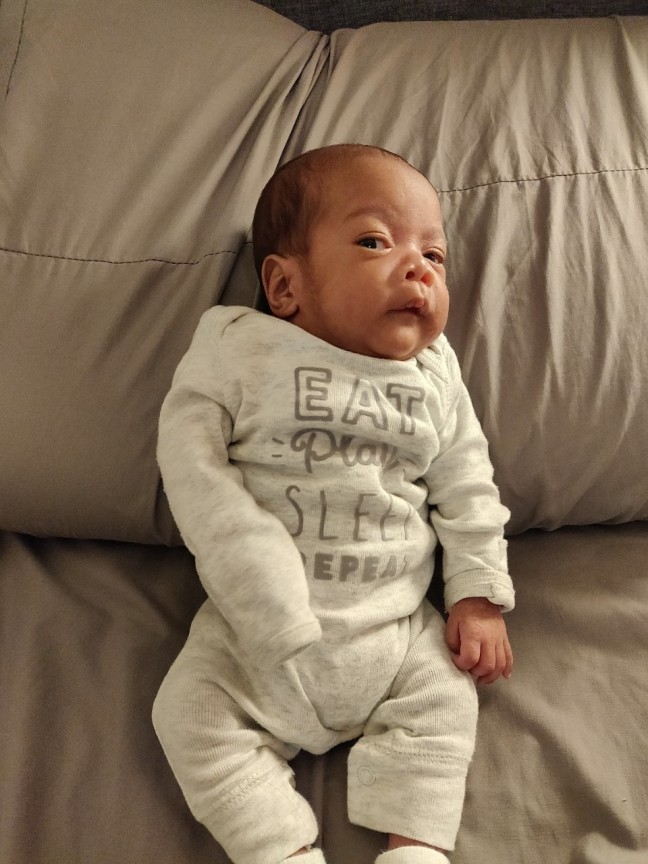 My little milk monster! He keeps me on my toes!

3 thoughts on “Breastfeeding and the Theology of the Body”